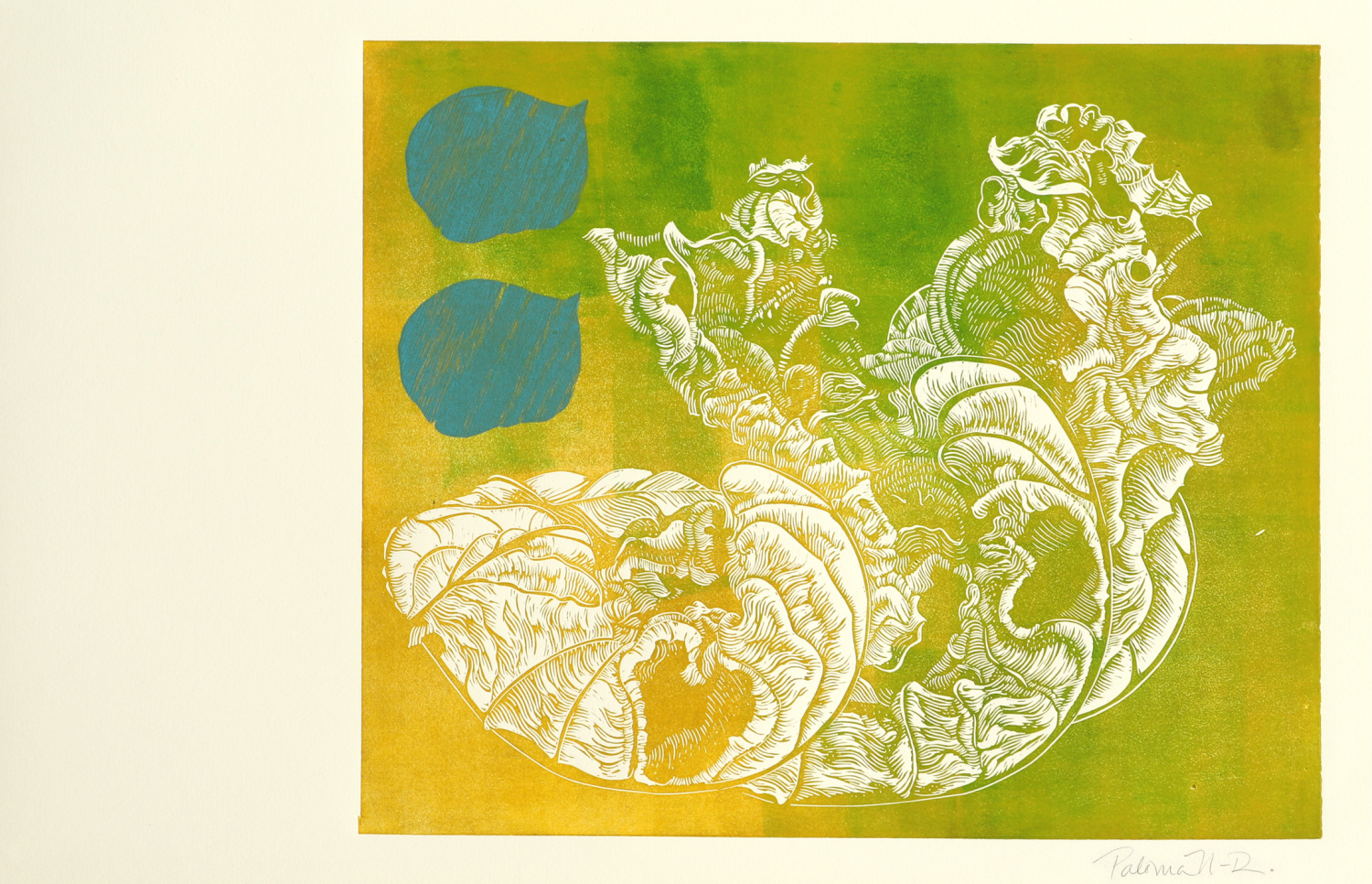 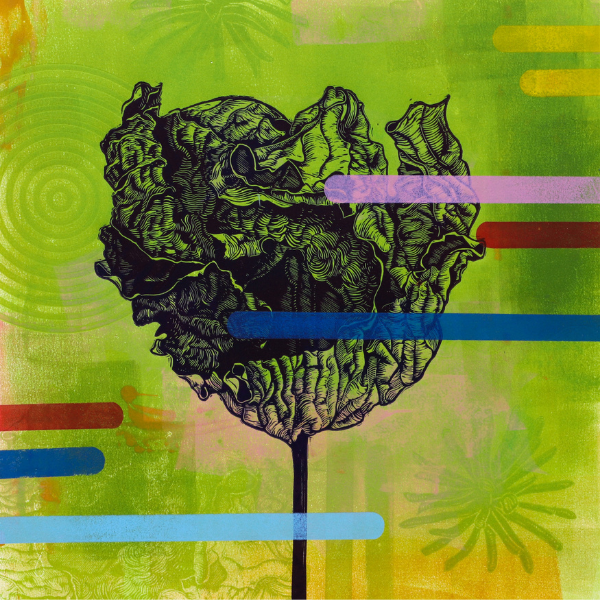 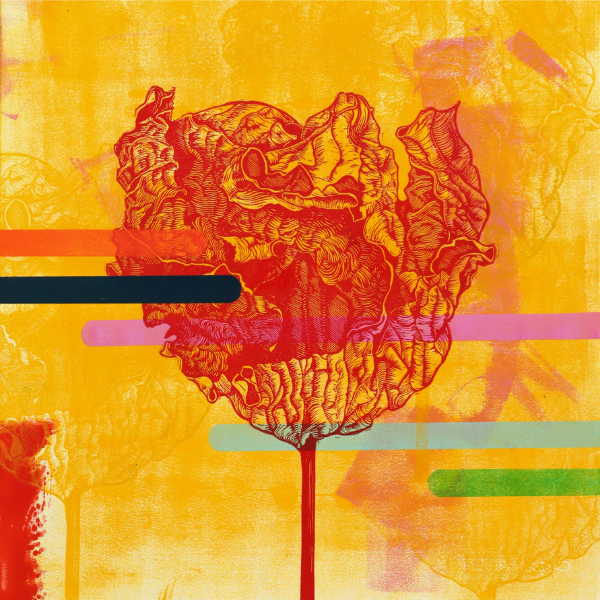 This exhibition is generously sponsored by George Orban
& Rae Ramsdell.

Paloma is the recipient of the Elizabeth Charles Award.

Elizabeth Charles believed in the arts as a vehicle for self-expression and as a means to develop a deeper understanding of our humanity. As a student, Elizabeth actively championed human equity and diversity. In 2020, the Lansing Art Gallery & Education Center and Elizabeth's father, Norm Charles, established the fund in her honor. Funding is provided by Norm Charles, Phyllis Mellon, as well as additional funders who seek to continue her championship by supporting Michigan artists and amplifying their voices through monetary awards and promotions. Preference will be given to artists with a vision for or emphasis on enhancing awareness and equity across race, gender, sexual orientation, gender identity, or ethnicity.

"I am primarily a printmaker, but I also work in drawing, painting, mixed media, and fibers. I was born in Lima, Peru; my mother is Mexican and my father is Chinese-Peruvian. In 1983, when I was 9 years old, my parents made the difficult decision to uproot our family and flee to Mexico because of the guerrilla wars (Sendero Luminoso), and the social and economic instability. Peru was going through. In Mexico, I grew up in close proximity to my aunt, who was a talented stained glass artist. Together we sewed, made preserves, and worked on the stained glass; she always told me I was an artist. She taught me to believe in myself and that is how I started to see myself as an artist.

I attended art college in Mexico, where I came face to face with printmaking during my first year at the Facultad de Artes Plásticas (College of Arts) in Xalapa, Veracruz. At that time printmaking was a difficult class to pass. It was a male-dominated field where I was one of the only women, and etching with nitric acid and little ventilation was the first project in the program. The professor was well known for giving harsh critiques to the student's artwork, yet I decided to stick around. I became fascinated with the possibility of having more than one print of my own pieces, with the many possibilities printmaking offers, as well as its importance in politics throughout history. Later in 1997, I transferred to the Rochester Institute of Technology. I received the RIT International Scholarship Award and the Mowris/Mulligan Scholarship Award, and I enrolled in the Fine ArtsProgram with a concentration in printmaking and painting. In 2000, I earned my BFA from the Rochester Institute of Technology. Currently, I live in Ann Arbor, Michigan. I am a resident artist at Ypsi Alloy Studios, where I am part of a collective of 16 artists that work in many different media such as sculpture, woodworking, silversmithing, drawing, and painting. My artwork is shown and sold at local galleries, and in galleries in the midwest. A collection of my prints recently became part of the Henry Ford Cancer Institute Art Collection. My latest in-print work, “Essays on Invisibility III” and“Momentary”, was published by The HandMagazine (Issue 30, November 2020). I am also a printmaking instructor, and I teach at the Ann Arbor Art Center. I formerly taught at Hollander's Book and Paper before the COVID-19 pandemic.

My work is closely related to my experiences of living abroad — the impermanence, the precarious construction of one's present, and even less of one’s future. It is about starting over with whatever is at hand, and about the rootlessness of the ones who move from place to place. Amongst the subjects that interest me are human migration, social visibility, and the intrinsic relation of humans to the universe and our dislocated relationship with it. My way of working is based first on the observation and study of the theme I want to develop. Visually, drawing is the strongest foundation my prints can have. From there, I move into the production of my prints, which are usually linoleum prints and monoprints."

"Essays on Invisibility is a collection of linoleum prints, monoprints, and monotypes that express my interest in making the invisible visible. The themes I am exploring in this series are immigration, social justice, the experience of assimilation, and the experiences of being invisible in a new culture and in a new country. The prints in this collection are my personal interpretation of how invisible immigrants, BIPOC, LGBTQ people, and anyone that doesn’t fit the established standards of normality is in their own settings. Legal or illegal, able or not able to make a comfortable living in this country, minority groups are somehow invisible, a lesser human. We are different, and most of the time people do not know how to approach us, which gives way to uncomfortable experiences. Those experiences include microaggressions, physical aggression, and violent crimes. These experiences leave us thinking of our value to society; they are a constant reminder of how undervalued we are. When talking about immigrants, our assimilation process is a difficult one. We miss our homes, our families, and our culture. We are surprised by all that is different from what we expected. The same happens to other minority groups when they walk out of their comfort zone, their family homes, or their communities into a world led by the white majority.

In this series, I am trying to interpret the effort of minority groups to remain, to take on opportunities offered by their surroundings, to become visible and therefore included in society. It’s my goal to acknowledge the feelings of those who feel invisible, to uncover our pain through my prints, and offer it to the spectator in a way so that he/she/they can open their hearts to the possibilities which can range from listening to their ideas to working together and rising each other into better positions that will allow for political, economic, and emotional stability in our communities.

I am the daughter of a Chinese father and a Mexican mother. My first migration was at age 9 when my parents left Peru and moved to Mexico because of the social and economic instability in Peru. That first migration and my multi-ethnic background gave place to my first experiences with invisibility. The first thing I lost in Mexico was my Chinese name, it became invisible. My Chinese name caused a good laugh amongst my new classmates in my new school; I decided not to let anyone know it, and I went by my middle name: Paloma. From there I had to understand that I was not like the rest. Yet, I had to learn to adapt and to defend who I was in my new surroundings. As I grew up, I realized that I am entitled to my voice and that my voice will help others feel entitled to their own visibility. I emigrated again, from Mexico to the U.S. in 1996. And again, from the U.S. to Argentina in 2011, and to Mexico again in 2013, returning to the U.S. 4 years ago. Living in so many countries, it was not surprising to me that invisibility is not only a trait of one place. It is a widespread phenomenon in which the Indigenous, the poor, the gay, the immigrant, the disabled, the Black community, and other minority groups are simply not included for the most part in the everyday life, as if they were invisible.

I want to make the invisible visible.

The imagery in this series is inspired by the guarumo tree leaves native to Mexico and Central America. Guarumo leaves are used as an alternative treatment for asthma, bronchitis, diabetes, heart failure, high blood pressure, liver disorders, and joint diseases. It also helps to relax muscles, promote sleep, reduce pain, and increase urination. Guarumo also helps to reduce swelling and treat skin diseases. When guarumo leaves fall from the tree, they start drying up and taking these shapes that make them different from one another. The guarumo leaf is the protagonist in this series. I like the idea of using an overlooked element of the environment that contains such beauty and healing powers, that is fragile yet strong as are the minorities I am talking about: the invisible. When we don’t take the time to look, these leaves are an invisible part of the landscape, and their beauty remains unseen.

Over the years I have explored the possibilities of the monoprint technique. The layers of color and texture help me create the different environments in which my guarumo leaves become the center of attention of these observations. The circular format creates the illusion of looking through a microscope or a telescope. I also use the whole format to represent boundless energies and chaos that is not contained by margins in the paper."