Engaging the next generation of creative entrepreneurs, the Michigan Collegiate Art Exhibition encourages artistic excellence, provides networking opportunities, and enhances professional capacity. Artworks of all medias are eligible; including but not limited to: paintings, sculpture, mixed media, photography, graphic design, installations, short film, and video games. The exhibit will be on view from March 3 - 28, 2020.

Please join us for the reception and awards ceremony on Friday, March 13th, to celebrate the work of Michigan's college students and future artists.

The Michigan Collegiate Art Exhibition is supported in part by Michigan State University’s College of Communication Arts and Sciences, College of Arts and Letters, College of Engineering and the Residential College in the Arts & Humanities. Additional support from Lansing Community College, the Mariel Foundation, Jack & Sue Davis and Bernie Campanella.

Leah M. Gose is a visual artist specializing in photography and book arts.  She is an Assistant Professor and Chair of Photography at Kendall College of Art & Design in Grand Rapids MI. Leah holds a B.A. in photography from the University of Colorado – Boulder and an M.F.A. in photography from Texas Woman’s University in Denton, Texas. Her current work explores memory loss through re-contextualized personal memories and appropriated family photographs. Her work has been exhibited in various venues both nationally and internationally

Laurén Brady is a visual artist, writer, and educator. She received an MFA in Studio Art from Michigan State University in May 2019. Her work has been included in several solo, small group, and national juried exhibitions and was featured in Studio Visit Magazine Volume 44 and the international art blog, For Example: Art. She was awarded artist residencies at La Macina di San Cresci in Greve in the Chianti, Italy, and with The Sable Project in Vermont. Along with her painting practice, Laurén currently is working as Development Manager at a non-profit art center and is an Adjunct Professor of Art at Michigan State University.

Quinn Jiles, returning juror from the 2019 Michigan Collegiate Art Exhibition. As an artist and community arts advocate, Quinn’s experience includes over 10 years as an arts administrator with an emphasis in youth programming. Quinn is an alumnus of The School of The Art Institute of Chicago with a concentration in art history, theory, and criticism. Her passion for community leadership that cultivates a dynamic perspective of the arts as a collective experience drives her profession advocacy. As a recipient of the Chris Clark fellowship with the Arts Council of Greater Lansing, Quinn founded Young Visions Video Project – a free video arts program for teens.

"The Nativity" by Isiah Lattimore

Elizabeth Charles believed in the arts as a vehicle for self-expression and as a means to develop a deeper understanding of our humanity. As a student, she actively championed human equity and diversity. Established by Lansing Art Gallery & Education Center and Elizabeth's father, Norm Charles. Funding is provided by Norm Charles, Phyllis Mellon, as well as additional funders who seek to continue her championship by supporting emerging Michigan artists and amplifying their voices through a monetary award and promotions. 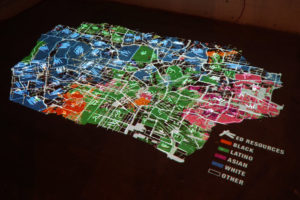 "As a first-year MFA candidate at the Department of Art, Art History and Design at Michigan State University, I believe in increasing awareness and engagement with critical issues of race, gender, sexuality and other identities among members of the community. In my artistic practice, I am committed to bringing attention to invisible and visible powers that harm underrepresented communities. Specifically , my current practice focusing on colonialism and its effects in Filipino-American culture.
Intermittently living in the United States and the Philippines has forced me to come to terms with the mental and physical gaps between these two places I defined as home. In each place, I became acutely aware of the divides within the underrepresented communities I identity with.
My research aims to question oppressive powers through the lens of personal and collective memory. At this moment, my interests have led me to consider the ways colonial powers have become entrenched in Filipino identity and homogenize contemporary Filipino-American culture. Two of my recent works, Delectable Hybrids and Jolliburglar, attempt to illustrate the gravity of Filipino-American cultural issues in neocolonial times. In Jolliburglar, I use two corporate fast food entities as a way to express the non-identity of Filipino-American identity. Delectable Hybrids asks whether Filipino-American identity is, at essence, a hybridized amalgamation, a cultural mishmash of East and West. Both pieces weave together political histories and lived experiences by integrating critical theory with the personal."